Tightrope walking across the Niagara gorge has been popular with daredevils since the 1800s. Its obvious hazards make it exciting for spectators, and funambulists have used many gimmicks to cross the wires, including stilts, bicycles and walking backwards. 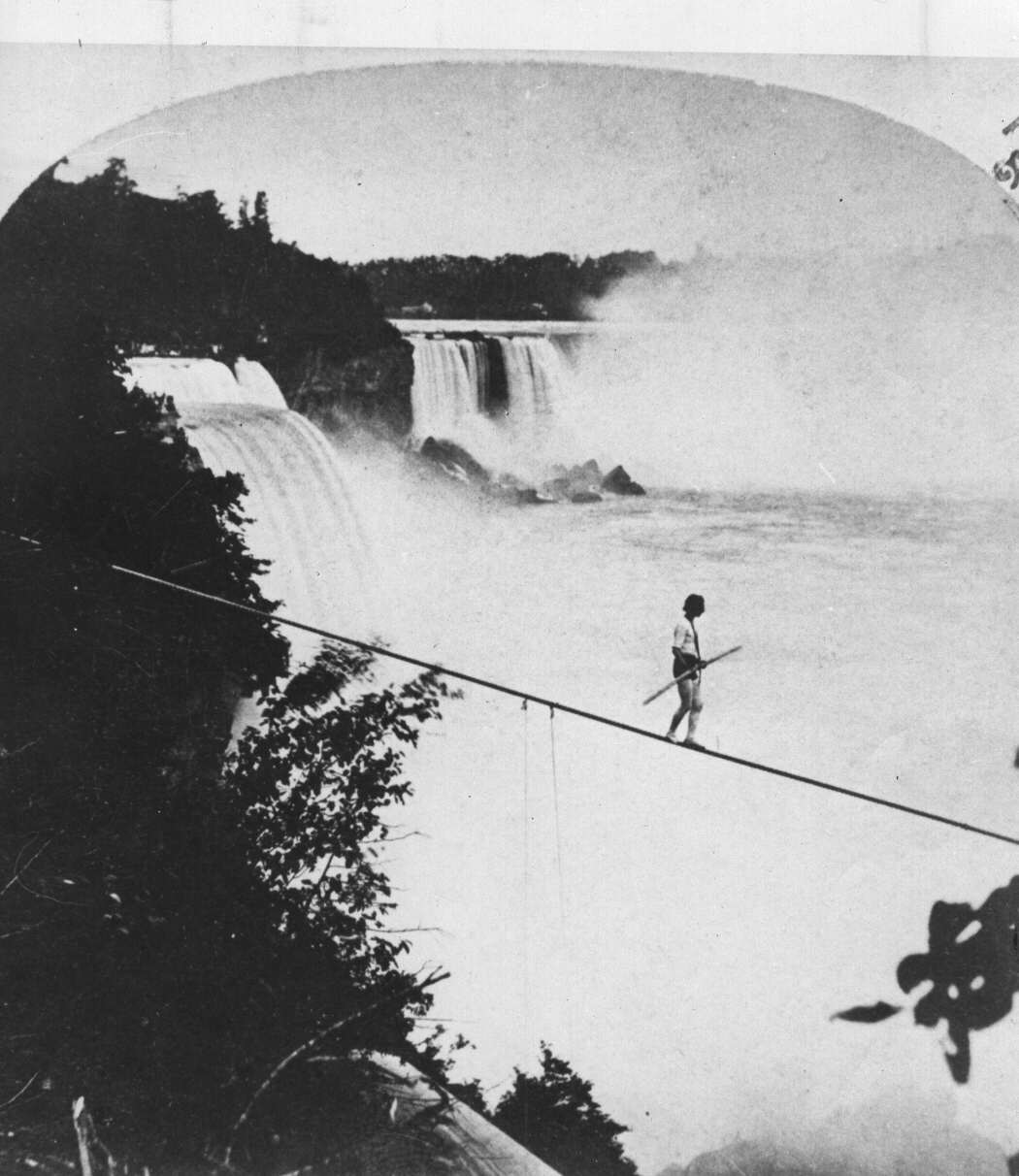 Henry Bellini was an Australian. In 1873 he began giving semi weekly performances walking across the Niagara Gorge using a 1,500 foot rope, the longest ever used across the Gorge. 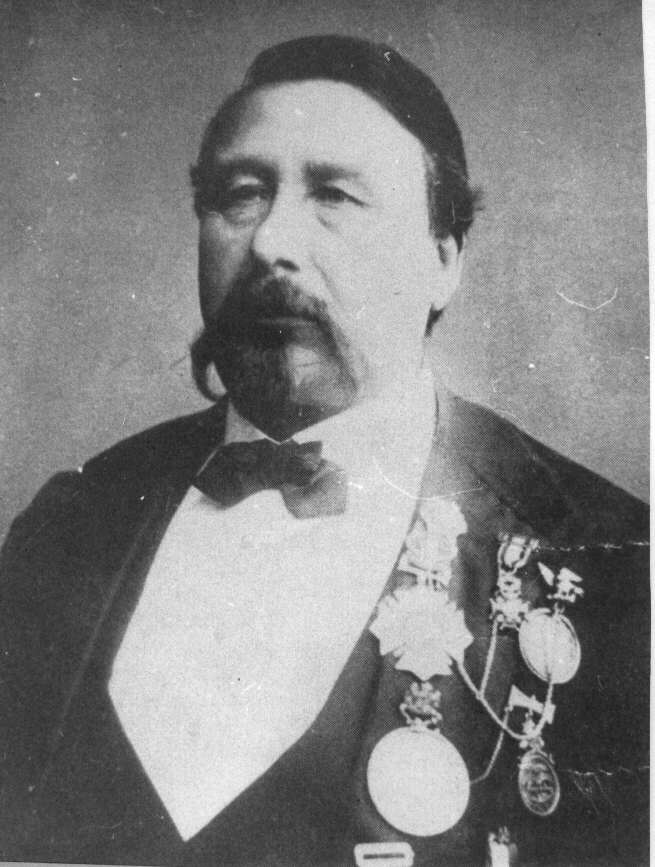 Jean Francois Gravelet a.k.a. Blondin was the first and possibly the best known of Niagara's funambulists! (tightrope walkers). He made 21 crossings on a 1,100 foot long rope stretched from Prospect Park in the United States to the Canadian side. On August 17 1859 he actually carried his manager across the Gorge on his back. The trip lasted 42 minutes and included 42 rest stops.

Records are very few pertaining to Clifford Calverly. He came from Clarksburg, Ontario and in 1887 came to Niagara Falls to perform his tight rope act. During his successful crossing he set the speed record for crossing the Gorge, 2 minutes and 32 seconds. Most of the performers averaged around 15 - 20 minutes. During subsequent crossings Calverly skipped rope, hung by one arm, sat on a chair and used a wheelbarrow. 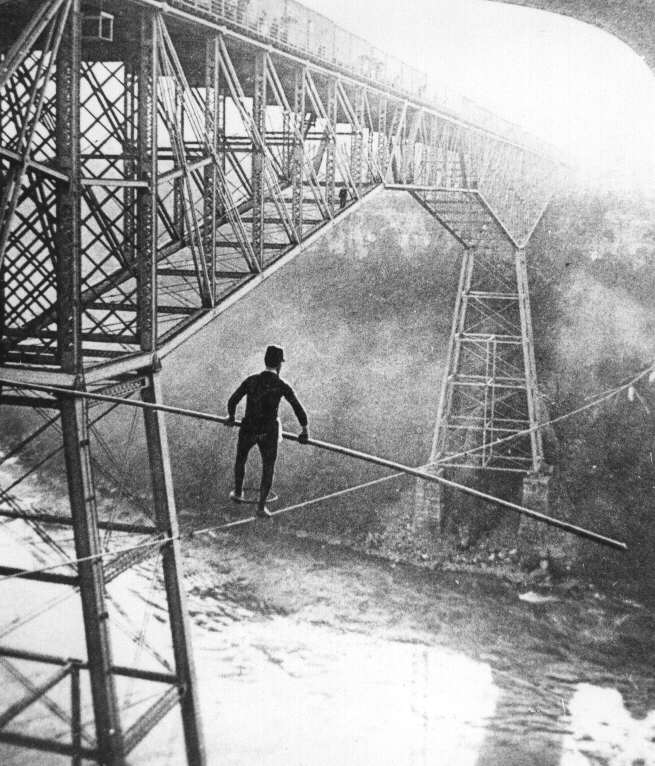 Dixon crossed the Niagara River over the Gorge near Queen Victoria Park on September 6, 1890 using Stephen Peer's cable. On July 17, 1891 he walked between the Cantilever Railway Bridge and Railway Suspension Bridge. 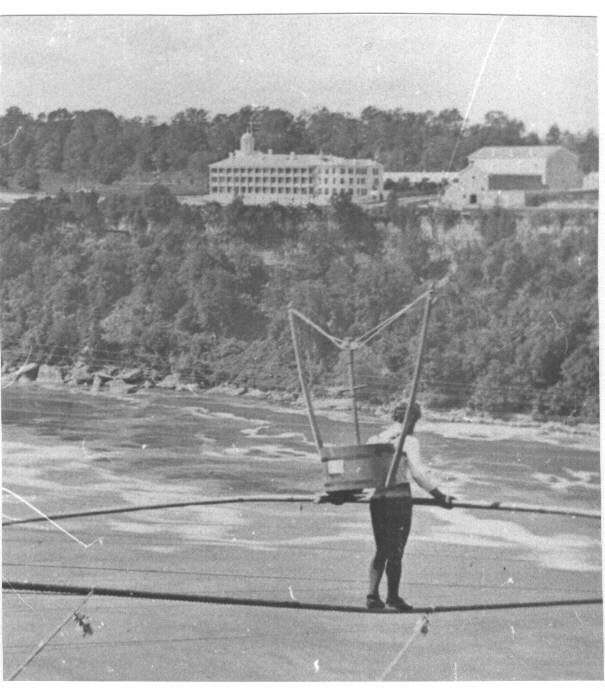 Born William T. Hunt in Port Hope Ontario, he reinvented himself as Signor Guillermo Antonio Farini. He walked  across the Ganaraska River near Port Hope and also across King Street in Bowmanville before moving on to bigger things, namely Niagara Falls. In the 1860s he carried a washing machine on his back to the centre of the rope, he set it down, lowered a pail down into the river, hauled up water and then washed the handkerchief of a passenger on board the Maid. 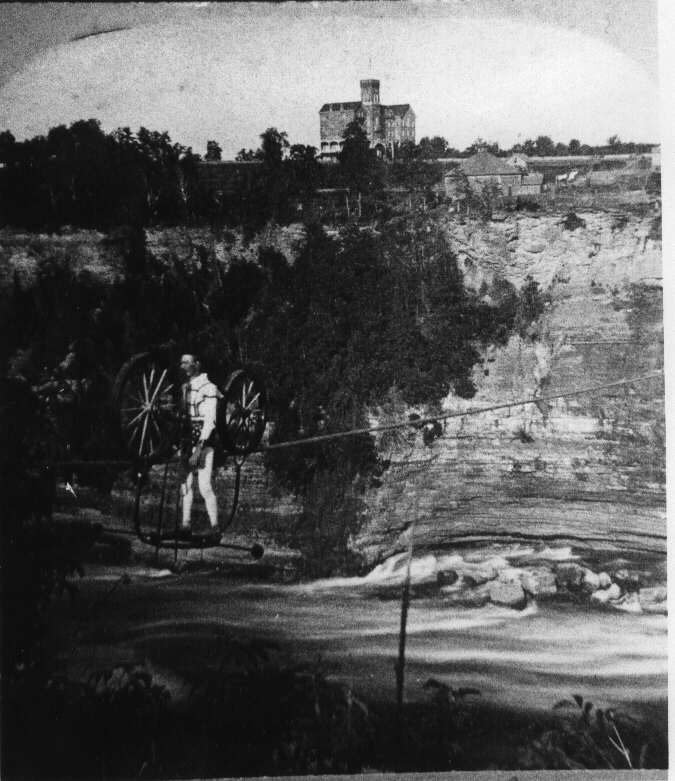 "Professor" Andrew Jenkins crossed the Niagara Gorge at the Whirlpool Rapids, north of the Railway Suspension Bridge on August 25, 1869, using a combination bicycle-velocipede. The Gazette said "his performance bears about as much resemblance to Blondin's as a poor counterfeit does to a genuine". Many sources refer to him as "Professor J.F. Jenkins". 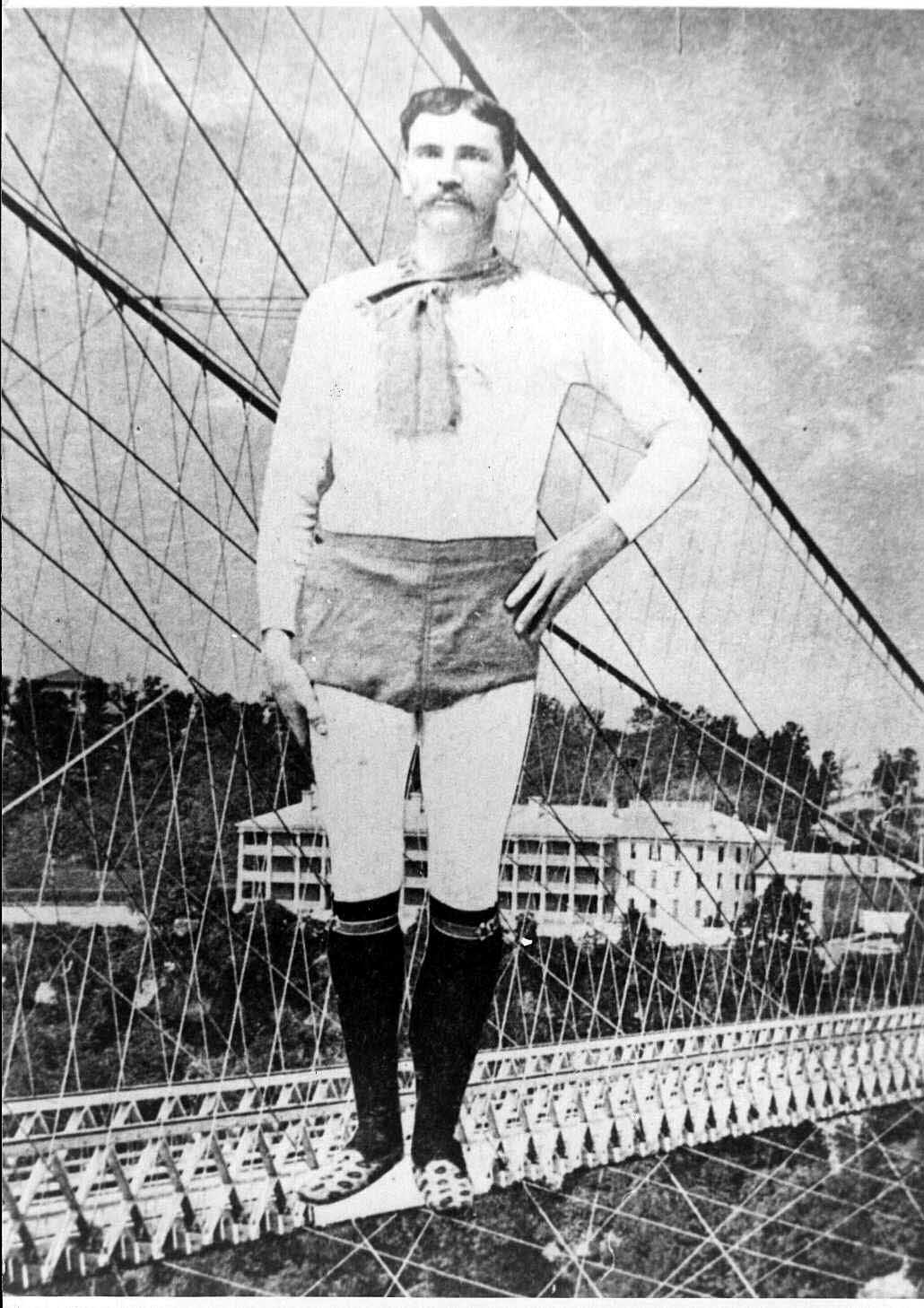 Stephen Peer was born in Stamford Township in 1840. He was nineteen when Blondin performed the first of his many tight rope walking feats at Niagara Falls. Peer became determined to become the first real "Niagaran" to walk the Gorge. In 1873 he became an assistant to Henry Bellini, he then illicitly used Bellini's equipment to perform his own first stunt. Bellini was not amused and attempted to cut down the tight rope. The residents chased him out of town, after all Peer was the home town boy ! By 1887 he had become famous enough to begin performing under his own billing and on June 22, 1887  he  successfully walked on a wire cable stretched between the present Whirlpool Bridge and the Pen Central Bridge. Three days later he went to the platform from which he had started his crossing, with friends. Speculation is that they had been drinking, Peer began to walk across the cable and fell forty five feet to his death. 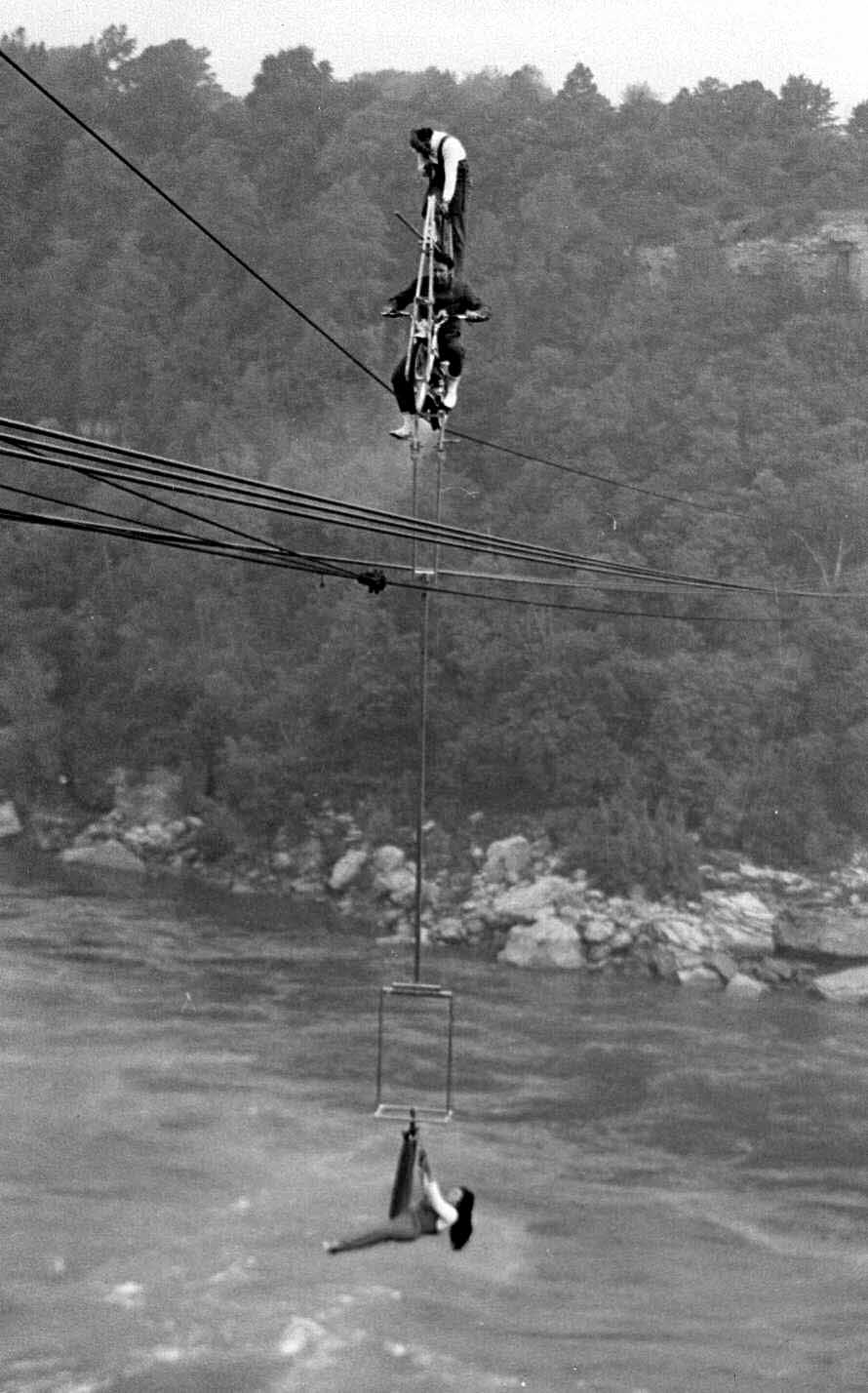 Henri J. Rechatin is one of the more recent daredevils of Niagara. In 1975 he crossed over the Whirlpool Rapids on the cable of the Spanish AeroCar. His friend Frank Lucas rode a motorcycle, he, himself was balanced on a platform like device attached to the motorcycle, and his wife Jancyk was suspended from the long pole Rechatin carried across his shoulders. In 1975 he expressed a desire to celebrate the anniversary of his feat by tightrope walking across the Niagara Gorge. His request was denied by the Niagara Parks Commission; stunting is banned on all of their property. 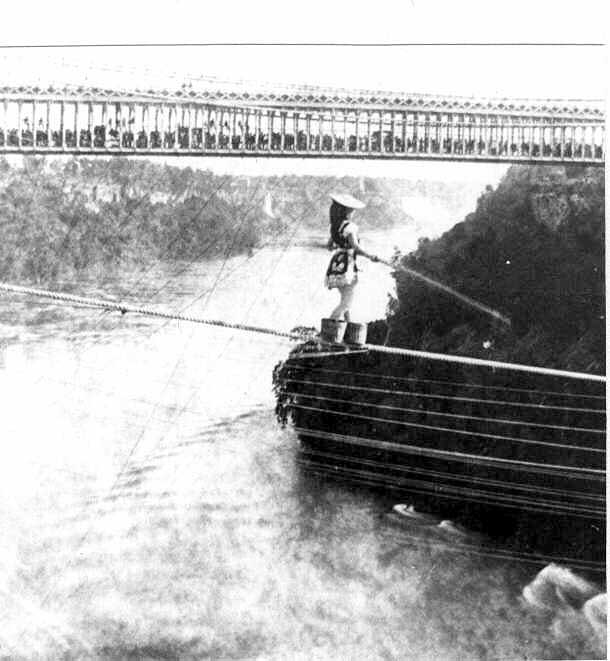 Signorina Maria Spelterini (also spelled as  Spelterina), of Italian descent, was famous for her stunts including walking with her feet in baskets and performing wearing shackles and chains on the tightrope. She was the first woman to ever cross the Niagara Gorge. Many of her stunts were done at the age of 23, as part of the celebration of the United States Centennial in 1876. 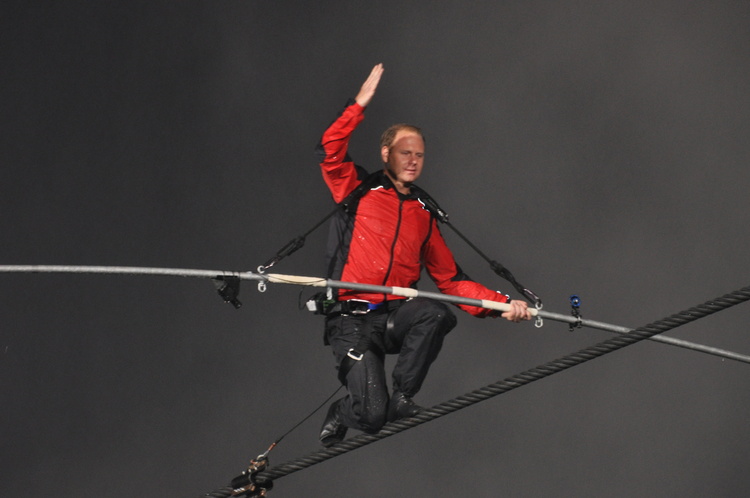 Nik Wallenda completed his historic walk across the Horseshoe Falls on June 15, 2012. He was the only person to actually traverse the waterfall itself - everyone else had crossed the gorge near the falls. He is also the first person to perform a crossing since the late 1800s. The crossing was from the American side to the Canadian side, and Wallenda was greeted by Canada Customs officers who checked his passport. Wallenda is a seventh-generation member of the Wallenda family of circus performers. Photo by Peter Conradi.