The Niagara Falls Public Library has its origins from 1878 in the Clifton, Drummondville, and Stamford Mechanics Institutes, formed as educational centres for working men and women. In 1895 these became public libraries.

The first main library of the new city opened in 1910 at Armoury Street and Victoria Avenue and was expanded in 1954.

Planning began for the construction of a new 47,365 square foot library at Morrison Street and Victoria Avenue on the site of the old T. E. Eaton Store. The result was the stunningly beautiful building which opened November 23rd 1974. Chief Librarian at the time, Dorothy Van Slyke, said "The building was designed with nature as its central theme. The hundreds of plants throughout, water running in the fountains and pools, and the rustic walkways give the feeling you are strolling through a garden". 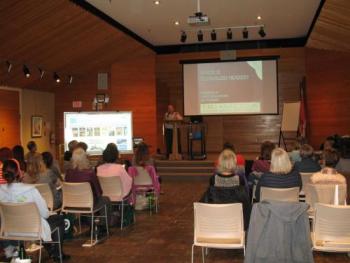 Located at the Victoria Avenue Library the LaMarsh Room is a beautifully appointed multipurpose meeting room. The room was dedicated to the Honourable Judy LaMarsh on June 23, 1980, four months before her death. Miss LaMarsh represented Niagara Falls in the House of Commons from 1960 to 1968 and served as Minister of National Health and Welfare and Secretary of State.

Seating 150 people, the room is used for meetings, piano recitals, art exhibitions, public information events and performances for children and adults. The room includes a Young and Chang grand piano, a 60" Sony television and DVD player , a ceiling mounted projection screen and has a newly installed sound system. Kitchen facilities are also available. The room is available for rent to community groups and businesses.

Visible from the windows of the Children's Department at the Victoria Avenue Library is a small natural woodland enclosure. If you look closely you can see small garden animals sculpted in limestone creeping to the edge of the forest to listen to a large story-telling bear.

Torontonian E. B. Cox, considered one of Canada's foremost sculptors in stone, was commissioned in 1974 to provide this feature.

"Story-Time Bear", as he is affectionately known to staff and the public, stands about 3 feet high and faces the wooded enclosure where he constantly beckons the animals to come and listen. In September of 2009 the bear was moved into the garden to join his fellow creatures.

The "Children's Woodland Garden" was a gift to the Niagara Falls Public Library from Mr. Bruce Leslie and Mrs. Wyn Leslie in 1974. The garden was renovated and renewed in 2002 by Mr. George Dalby in memory of his wife Winnifred Dalby, a long-time member of the library staff.

On August 28th 2009 "Story-Time Bear" moved from the Children's Department to join the other animals in the Woodland Garden. You can still see him and he's still telling stories to the other woodland creatures.

Dedicated to the memory of Harold David Rosberg and Joseph Lyon Rosberg, businessmen from the City of Niagara Falls, the gallery features a monthly exhibition of visual art from the Niagara Region, as well as, special traveling exhibits.

The Gallery was refurbished in 2014 with assistance from the Niagara District Art Association. 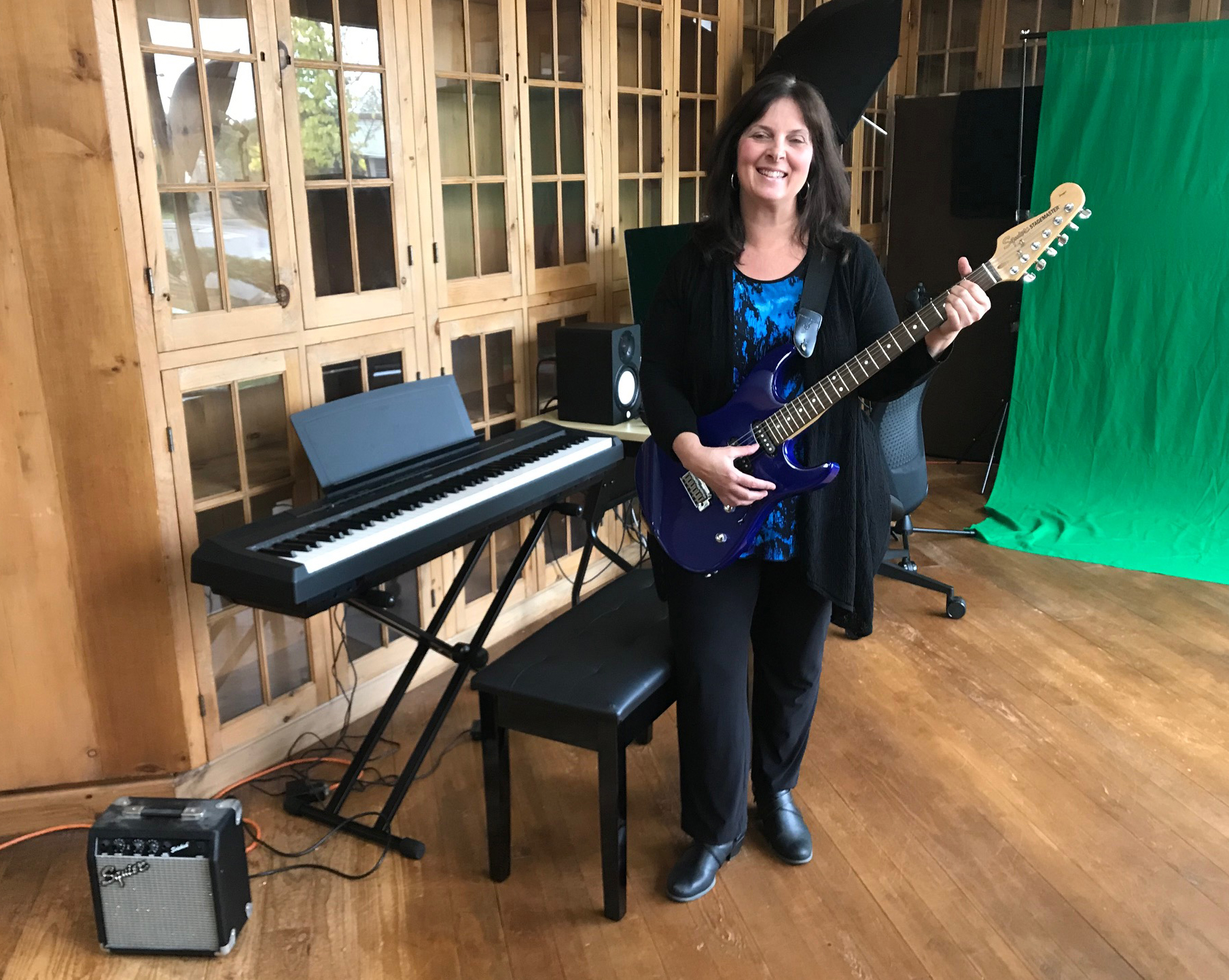 The "Sir Harry Oakes Room" was a gift to the Library from Eunice, Lady Oakes, in memory of the late Sir Harry Oakes. Initial planning for the room was done by former Chief Librarian Dorothy Van Slyke as part of the requirements for her Masters of Library Science Degree. The concept found approval with the Library Board and its New Building Committee.

Donald M. Chapman Associates, architects for the library, designed the room and its furnishings. John Tries Constructions Limited was the general contractor, and most of the custom furnishing was the work of Weller's of Scarborough specialists in pine reproduction work. The room reproduces a typical setting of the Niagara area in the early nineteenth century. It is made of pine, except for the maple chairs. Bookcases are ventilated to keep the priceless collection preserved.

Initially, the Library's ever-growing historical and genealogical collection of the City, the Niagara River and Falls, and the Niagara Peninsula was housed in the Oakes Room. The wide variety of rare material in these collections - including guidebooks, atlases, local histories, magazines, maps, photographs, art reproductions, newspapers, clippings, government reports and City Council minutes - were used extensively by staff and the public. As the collection grew, it had to be relocated, so the Oakes Room became a quiet reading and study room and a small group meeting room.

There is a continuing appreciative response to the Sir Harry Oakes Room. The striking contrast between the contemporary architecture of the Library and the traditional style of the Oakes Room is visually exciting from both inside and outside the building. Today, the Oakes Room Innovation Hub is a vibrant space with equipment for audio and video recording/editing as well as 3D printers and laptops for computer classes.

This magnificent sculpture is made of stainless steel and stands ten and a half feet tall. It was designed by Niagara Falls sculptor Mrs. Helen Robertson .

The artist has symbolized in stainless steel man's unending reaching for knowledge and achievement. The base represents the earth, then come the symbols for man and woman, followed by curiosity, achievement and the universe.

Technical assistance was provided by the Niagara Sheet Metal Company and Oneida Ltd. It weighs some 50 pounds and has $200 (1964 prices) worth of steel in it.

"Ad Astra" can be viewed at the Victoria Avenue Branch of the Niagara Falls Public Library. It is located in the Interior Garden.

Library service began in Chippawa in 1921 when Mrs. Corry and other members of the Chippawa I.O.D.E. organized a subscription library for residents of the village. By 1948 the library had been remodeled and contained some 3,000 books. It wasn't until 1964 that the village began to plan for a free public library which opened in 1967.

In 1970 the Village of Chippawa was amalgamated with the City of Niagara Falls, and the library became a branch of the Niagara Falls Public Library system. 1984 saw a major renovation and enlargement project, resulting in the building as we know it today. The building comprises 5,487 square feet on two floors.

In 1953 Stamford Township appointed a Library Board, and a contract for service was arranged with the Niagara Falls Public Library Board. A library was opened in 1957 at Portage and Vine, moving into the Town & Country Plaza in 1962.

Stamford Township and the City of Niagara Falls merged in 1963, and the library became a branch of the city library system. It relocated withing the plaza in 1974, and in 1986 it was enlarged to its current size of 5,967 square feet.

The site at Montrose Road and McLeod Road was selected by City Council for the Community Centre on August 13, 2001 and in April 2002 City Council confirmed its desire to have a branch library as part of the Centre. Ground Breaking Ceremonies took place on October 22, 2003.

The 7865 square foot Branch Library is just one tenant of the multi purpose facility, and opening day was September 10, 2005. The large and airy library is located on the ground floor just off the lobby entrance, and is a welcome addition to residents of this part of the city. Capital budget for the branch was $500,000 for shelving, furniture, computers and other equipment and $889,000 for books, magazines and other non-print material. A total of more than 40,000 items are available for loan.